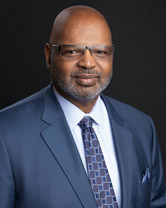 Mr. Dinkins brings extensive experience as a board member and a chief financial officer of a publicly-traded company to the Board, as well as knowledge of complex financial and operational issues facing large organizations and an understanding of operations and financial strategy in challenging environments. Through his role as a chief financial officer, he has also overseen the information technology risk assessment processes of a company. In addition, Mr. Dinkins brings the perspective of the insurance industry and the medical device industry to the Board, both of which are important related industries for the Company.