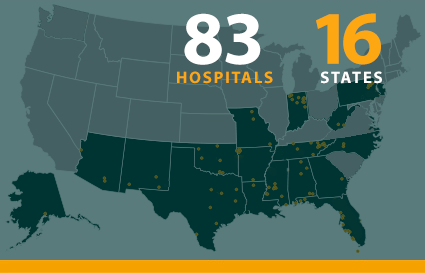 For more than 30 years, our organization has been keeping healthcare close to home in cities and towns across the nation. Our affiliated hospitals deliver a wide range of health services and function as vitally important members of their local communities.

As one of the largest hospital organizations in the nation, our size provides an advantageous economy of scale and critical resources to help local hospitals identify and act on opportunities. As a result, these hospitals have made significant investments in healthcare services, physician recruitment, facility improvements, modern medical technology and, most importantly, an ever-strengthening commitment to clinical excellence.

Acquisitions also have fueled our growth. Dozens of individual community hospitals and small healthcare systems have joined our organization over the past decade. Integration of these facilities, along with the large scale acquisitions of Triad Hospitals, Inc. in 2007 and Health Management Associates, Inc. in 2014, has made us one of the largest publicly traded hospital companies in the nation as measured by number of hospital facilities.

On April 29, 2016, the organization formed a new, independent, publicly traded hospital company by spinning off a group of 38 hospitals and Quorum Health Resources, LLC, a leading hospital management and consulting firm. That new company is Quorum Health Corporation, which is also headquartered in Middle Tennessee.

Community Health Systems, Inc. is headquartered in Franklin, Tennessee, and our common stock trades on the New York Stock Exchange under the symbol CYH.