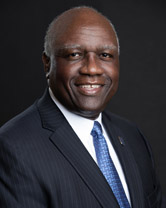 H. James Williams, Ph.D. has served on our Board of Directors since December 2015. Dr. Williams has served as president of Mount St. Joseph University in Cincinnati, Ohio since March 2016. Mount St. Joseph University provides interdisciplinary liberal arts and professional curricula to its students, including a number of graduate and doctoral healthcare programs.  Prior to that, he served as president of Fisk University, a leading liberal arts university located in Nashville, Tennessee, from February 2013 until September 2015. Fisk University is renowned for its leadership role and history in the education of African-American students.  Dr. Williams also served as dean and a professor of accounting at the Seidman College of Business of Grand Valley State University in Grand Rapids, Michigan from 2004 until 2013.  From 2006 until 2013, Dr. Williams served on the board of trustees of St. Mary’s Hospital, a non-profit hospital in Grand Rapids, Michigan.  From 1999 until 2004, he was dean and a professor of accounting at the School of Business of North Carolina Central University in Durham, North Carolina.  From 1994 to 1999, Dr. Williams was dean of the School of Management and a professor of accounting at Delaware State University in Dover, Delaware.  Prior to that, he held faculty positions in the business schools at several universities.  Dr. Williams also serves on the boards of several non-profit organizations.  He previously served on the advisory board of Fifth Third Bank of Tennessee and as a member of the Metropolitan Nashville Airport Authority’s Air Service Coalition.  Dr. Williams has also practiced law, primarily in the areas of partnership and corporate tax, as well as contract law. He started his diverse career as an accountant with Ernst & Young where he worked in the audit division with companies in the banking, textiles, automotive and shipping industries.